It used to be a very standard question: What were you doing before the Internet?

These days, the answer is most likely, “I was in school,” but ten and twenty years ago, people came to online marketing and then digital analytics from a wide variety of careers and it was helpful to know your colleague’s background before delving into a technical, commercial and sociological conversation about the changes the Internet would bring.

Gary Angel, Partner / Principal of the Digital Analytics Center of Excellence at Ernst & Young, spent his formative years writing commercial software for commodity and stock trading in real time. He did a lot of analytics around the way things were trending. His job was to algorithmically spot stocks, bonds or commodities that were breaking their traditional price movements, for the purpose of arbitrage.

Gary was interested in the pure analytics side, crunching serious numbers to increase profitability and customer loyalty for VISA, Bank of America, and American Express. He also created and implemented multi-million dollar CRM systems.

It was the study of how people used their credit cards and what the amounts spent in different categories with different merchants said about them. It was a rich harvest of transactional data that, for example, an airline could use to target credit card holders spending certain amounts with competitive carriers.

This sort of analysis also came in handy when credit card co-branding came along. “By pairing off a traditional brand with a bank,” Gary explained, “you could really add value to the credit card. So a lot of the analytics was around figuring out what co-brand card might be of interest to a specific population.”

Gary also worked on campaign-based, direct mail modeling. All that newfangled A/B split testing and multivariate testing we’re using nowadays? Not so new. “One of the things that has changed,” Gary said,” is where the attribution studies come in. There are so many more touches now per customer. We were doing a lot of predictive modeling, but it tended to be one-touch analytics. Predictive modeling was a bit different then, but in some ways, it was more sophisticated than most people are doing now.”

Gary clearly remembers the days of tracking incremental lift, always with a control group and at a set, known cost. Direct mail pieces are expensive on a per-person basis, so they focused on optimizing their targeting. Gary laments the rigor that has been lost.

People spend very little time on their targeting. Nobody ever looks to see if the targeting actually worked. Did we get the people we actually meant to get?

They might look at attribution and click-through rate the conversion rate, but they rarely look at whether they actually got the right demographic. Did the targeting actually work around that display campaign? That’s a pretty fundamental miss. If you’re just looking at things like conversion rate, you only have one option which is, ‘Do I want to keep doing this or not?’ So, if a campaign isn’t working, the only option you have is to cancel it.

Gary prefers knowing if campaigns are working when they hit their intended target. “It’s actually surprising to me that a lot of really sophisticated, large vendors of digital campaigns are unable to tell you whether their targeting is working or whether their creative is working. That’s something we would never miss in traditional direct marketing.”

Gary saw his Bay Area friends spinning up new online ventures and became fascinated with the Internet. Bit by the entrepreneurial bug, he signed up a bunch of Sonoma wineries for a wine site. “This was back when you had to do real programming in order to put any kind of website together. We had our own garage machines. It was a hobby business. It was fun.”

But Gary couldn’t leave his analytics background behind and soon he and his partner Joel Hadary built a boutique consultancy. They tackled American Express as their largest customer after a year of talking them into in doing web analytics.

One of the biggest challenges we had and I think this is very typical at that time, was that no one had ever worked with web analytics data before. So, it had no security classification. Getting them to give us the data required a very involved process of having their data security people evaluate what’s in a web log? This is a highly regulated business where personally identifiable data comes with strict controls and they had to make up governance rules on the spot.

Two more thing slowed down Gary’s ability to jump in and help his clients. First, the data were really messy. This was no longer simple (by comparison) transactions. This was very fuzzy behavior. Second, his clients were simply not ready for it. “They wanted much, much simpler stuff. We had to rethink and refigure out how to do everything in digital, and that was a pretty long and involved process.”

Gary got them started with segmentation to build customer profiles but traditional methods just would not work with web behavior.

But no one was really interested because you couldn’t do a targeted marketing program to people who viewed two pages and left the website, right? So we abandoned that and went through what a lot of people who come to web analytics went through. We thought, if we could just see what people are doing at the website. If we had a path analysis, that would be great.”

But there was no path analysis then. So they wrote their own. The first time they tried it out, the system ran and ran and ran and when it got up to more than three million unique paths within something like a week of data, they realized they were on the wrong path.

Next, they took a crack at straight correlation using statistical analysis. What pages are correlated with successful outcomes? Their statistical backgrounds suggested this would reveal all, but at most, they found it was merely interesting… and only sometimes.

This is what led Gary, Joel and Semphonic’s VP of Analytics Paul Legutko to their 29 page treatise on Functionalism. 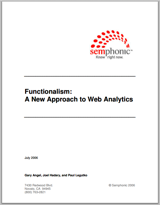 We found when we restricted correlation analysis to fairly similar kinds of pages, it was much more interesting than when we didn’t. If instead of looking at every page in a website, we just look at pages that we thought were about selling products and then we went to the correlation between those pages, we were able to say more interesting things about which of those pages was more impactful.

Gary claims it’s a simple concept, but under-credits the years spent trying everything else first.

The combination of functionalism and segmentation powers a lot of Gary’s work today. Who’s coming to the website? What are they trying to accomplish? Which pages serve which of those cases? Which pages are successful for specific types of customers?

When asked about Big Data, Gary can readily identify, but is not at liberty to talk about, clients who are doing extraordinary work with Hadoop Clusters and classic Big Data pre-processing to solve in specific problems.

Back in the ’90s, we were looking at a lot of data and we were doing pretty sophisticated analytics but I would not classify what we did as big data analytics. We could cleanly aggregate all the customer data and were able to do things like the number of transactions they had by merchant type, by merchants and just how much they spent each month. That was very easily analyzable.

It changes when you start looking at the extremes of detail data. Looking at which pages a person looks at on a website doesn’t tell me anything and neither does aggregating it up and saying he looked at 17 pages.

The meaning is inherit in the stream of events. With credit card analytics, we never looked at a time sequence of data and to figure out the meaning.

Meter reading is inherently interesting about the customer to tell whether they’re a high use, medium use, or low use customer. But once I start collecting that meter data every hour, the type of analysis I’m doing fundamentally changes. Figuring out how the usage varies over days and times and seasons can bring you to much more interesting conclusions.

It isn’t just more of the same. It really is a different kind of analysis.

You have to decide if Big Data is likely to be meaningful to you. Does going down to that level of detail open up new ways to understand customers and optimize your business?

While Gary doesn’t have an AI/machine-learning background he is excited by the possibilities. But he is quick to point out that all analytics are predicated on the subject matter expertise of the individual directing the machine.

Most good analysis comes from someone figuring out what the right variables are. The machine can only find which variables are potentially interesting from the initial set of variables that an analyst identifies.

A human analyst had to figure out that changing those two things was a variable for the machine to consider.

There were many variables on top of the underlying transaction data and a lot of meta data about how far out they were searching, how many days between the search, what the destination date was, whether it was a weekend… all those things turned out to be very important but you must tell the machine to look at them.

If you just give hundreds and hundreds of raw behavioral variables to the machine, it won’t give you as good an analysis because it can’t figure those things out. If you give it the high level variables, the machine will do a great job figuring out which ones are most important.

When talking about the art of analytics, Gary surprised me with a wonderful insight.

I had been thinking and writing about data artists. The data scientist is responsible for finding new data, collecting it better, storing it better, writing better algorithms. But the data artist is the person who can take that output as raw material and fashion something that evokes emotion in the viewer. The goal being a business person taking action and making business decisions.

Gary agreed it was an interesting analogy but argued that it didn’t quite fit. 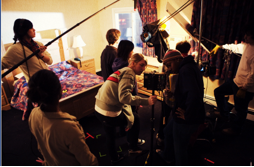 If you want to make a great painting, you start out from the vision side. Then, you have to learn how to put colors together and blend them and learn the strokes. We, as analysts, tend to start from the other side, figuring out how to blend colors, hoping at some point, a great painting will emerge.

Above all, Gary loves the puzzle. He’s excited about the unexplored opportunity in digital across the board. He sees huge opportunity in wearable computing; more stream data. He sees tremendous opportunities to drive personalization and customization online and on mobile devices to deliver a coherent experience. Gary sees the puzzles not just as data analytics issues, but infrastructure issues about how to develop, modularize and manage the infrastructure and corporate culture. He sees these are not a trivial problem to solve and that they will be solved differently, industry by industry.

We can be certain the Gary Angel will be there, helping those industries one by one. He’ll be the guy with his hands deep in the data and that gleam of conjecture in his eye as he asks his client, “Wouldn’t it be useful if we could correlate this with that?”

And years from now, when asked what he was up to before the Internet, he’ll smile and say, “The same as always, trying to derive insights from data.”