9 years ago
Justin Cutroni: Guiding the Future of Digital Analytics

Online marketing and digital analytics may not be brain surgery, but Justin Cutroni did, in fact, start out as a rocket scientist. That’s a good start for somebody who would end up bearing the title of Analytics Evangelist at Google and being the author of books on the subject:

Google Analytics (second edition) is for the advanced GA user. It dives into many advanced topics, like custom variables, that Performance Marketing does not cover. This book is all about GA.

Justin studied mechanical and aerospace engineering, designing small thruster rockets for satellites at Worcester Polytechnic Institute near Boston. His first professional job was at Accenture in the Process Competency Group. He helped clients re-engineer business processes by prototyping new technologies for them. If a large bank might wanted to transfer money between trading desks, Justin’s team would prototype it to see how their business process would change with the new technology. Business process testing, if you will.

However, the coat-and-tie world of corporate management consulting didn’t suit Justin. He opted for the independent life as a self-employed consultant, providing Internet consulting and custom programming services. That’s where he learned the difference between working a lot and working non-stop, "Running a business is a lot of work especially a small business," he told me.

This was where Justin became aware of web analytics. In the early 2000’s, he was consulting to a small company that sold computers online. In an effort to answer John Wannamaker’s question, he combined query parameters, log file analysis, and PERL scripts, he built a system to track display advertising.

Justin’s toe in the analytics water became a white water ride when he joined EpikOne in 2004 where, as an Urchin Partner the water was fine… but swift. Within a month, Google announced that they were acquiring Urchin.

These were heady times, according to Justin:

Google had no official partner programs across any other product stack, and the Urchin Team had a really well-defined reseller program. They were huge in international, sold a lot to data centers and wanted to keep their partner program alive and well.

Justin was trying to learn all about Urchin as fast as he could.

EpikOne was really more of a web development shop and the founders said to me, “This Google stuff is probably important so why don’t you figure out how the whole Google Analytics / Urchin thing is going to work.” I primarily built services supporting Urchin, and at that point, it was Urchin on demand, their predecessor to Google Analytics.

After the Google announcement, everyone wanted to get in on the Urchin action. Justin ended up working with banks, sports leagues, retailers, publishers, and a wide variety of verticals.

The hardest part? Trying to educate companies about what it was and what it could do.

To me, it’s always around getting the marketers like to see the light. People in technology know that there are tons of data – it’s a given – it’s like air.

Back then, you could tell someone in marketing that there was information that was a direct reflection of a decision they made. Whether it was an affiliate agreement or changing a page or the content of a page, they could tap into the action-reaction measurement cycle.

That was the most rewarding part, when the light bulb went on and they realized they could see they had moved the needle themselves or had failed to move the needle – but could kind of fix it before their boss found out.

Justin finds the challenges invigorating. One of his most stimulating and rewarding client endeavors was a global, housing rental company.

They did an Airbnb type business model and that was the best project because of the complexity of the data, the reporting, and the visualizations. They were an absolutely data-informed company but they had 60 plus websites, 14 different languages, 10 different platforms and numerous HTML iframes to stitch the entire thing together. This was before tag management really got off the ground.

I think all of us love the complexity. We love to sit down with a client and identify core segments; These are the valuable, top 10%; These are the next 20%, and so on. Identifying those groups, translating that into the different types of segments, making that into an implementation, and translating it to a different platform implementation and getting all of it right.

That’s the really fun stuff – where you have to think strategically about the important metrics and data, and then drill down into the implementation and say this is how we’re going to actually make that data happen.

With that background, Justin was a natural choice to become the Analytics Evangelist at Google.

He now manages all of Google’s analytics education. His team writes all of the content in the Google Analytics Help Center and the in-product help such as tool tips and definitions.

Justin is one of a small team that does blogging and public speaking and spends a lot of his time working with the product team, helping them figure out like what to Google Analytics or Google Tag Manager.

But he’s still thrilled to work with clients, because that’s where the challenges are and where the breakthroughs come from.

I’m super excited about the advanced stuff. That’s the thing that’s really demanding but yet so enticing about our industry. Stuff changes all the time, and it’s not like little things.

We have the ability to do completely new types of measurements or new types of analysis every six months because of technological breakthroughs. I love how we’re converging with the big data part. I love the most advanced folks who are truly embracing experimentation at lots of different levels.

Justin is happy that A/B split testing and multivariate testing are a lot more commonplace these days but what really floats his boat are companies that are doing true, customer experimentation.

When you think about the number of parameters that go into creating a statistically significant model or experiment framework to do that, it’s really, really hard in getting all the data together and targeting using first and third party data sources. They’re looking at 3 or 6 or 9 months of customer data by industry.

So I’m trying to figure out how to bring that mindset of total customer experimentation to everybody else that’s kind of still stuck on changing the image on their landing pages.

Great analytics requires great analysts. In Justin’s eyes, the one with the most inquisitive mind wins.

A great analysts has that ability just to keep pushing and asking, why did something happened, and truly understanding it at a very granular level. But then, be able to bring that back up and look at the big picture.

While curiosity is critical for input, the analysts output is equally as important.

Story telling is huge. You’re never going to get anyone to change something unless you have a convincing argument. The skill set is communication, identifying business objectives, telling the story, and using visualization to create a compelling argument that is not all bullet points.

When asked about the future and where all of this is heading, Justin gets excited about building the community.

I want to really raise the level of understanding globally for people doing digital measurement an improve their skills and capabilities. I want to continue to build a team at Google that educates everybody out there.

Toward that end, Justin has been burning the midnight oil on the Google Analytics Academy.

This growing compendium of analytics courses resources includes videos of lessons from Google’s digital analytics experts, short quizzes and practice exercises, and forums that let you engage with other students and analytics experts. 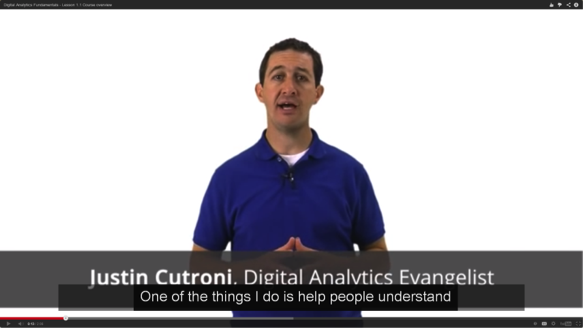 And what about Justin’s view of digital analytics over the horizon?

I don’t see true artificial intelligence for analytics in the next 16 months. I don’t think any of us is going pick up our phone and say bring me 400 new customers out less than $38 EPA. Maybe that’s a 20-year vision but not or a 2 year vision.

So stay tuned. You know Justin will.