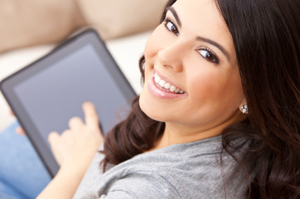 Tablet shoppers account for a slight majority of mobile sales and consistently spend more money and convert much more often compared with shoppers on smartphones, the Internet Retailer Mobile 500 finds.

There are exceptions to the rule, but merchants in m-commerce today say that smartphones are used a bit more for research than purchasing, while tablets are mobile shopping machines. At 2.63%, the conversion rate on tablets for the 43 retailers is almost three times higher than the smartphone conversion rate, 0.99%, according to the Mobile 500 guide. What’s more, the average ticket for purchases made on tablets is $125, 18% higher than the $106 smartphone average ticket, the guide says.

The typical tablet shopper at Crate & Barrel, No. 32 in the Mobile 500, is reclining on her couch or laying in bed, browsing and buying—and making some big-ticket purchases, including furniture, says John Seebeck, vice president of e-commerce.

“Lots of our tablet customers are looking at products such as sofas and bedroom pieces; tablets offer a great way to show a significant other what you’re thinking of,” Seebeck says. “Purchases on tablets in that furniture segment point to the big difference in average order value between tablets and smartphones.”

As reported in the Mobile 500, the average ticket for a Crate & Barrel tablet shopper is $174, versus $127 for a smartphone shopper. 80% of the retailer’s mobile sales come from tablets while 20% stem from smartphones, the guide says. The conversion rate for tablet shoppers is 2.35% and for smartphone shoppers 0.92%. Crate & Barrel, including its CB2 and Land of Nod properties, will reach $100 million in mobile commerce sales in 2013, up 67% from $59.7 million in 2012, the Mobile 500 finds. Most of that growth is coming from tablet shoppers, Seebeck says.

The Crate & Barrel tablet shopper is more than likely from a metropolitan area, more affluent than smartphone shoppers, and also shops in-store, online and on smartphones, Seebeck says.

“Smartphone shoppers are looking at our e-mails whenever they have downtime, and they just get snippets of stuff as they look up answers to questions or start the shopping process and get ideas, then finish it off later on the desktop,” Seebeck says. “Smartphones are also used for in-store research. And recently our smartphone usage has shifted to a less affluent demographic. They are more price-sensitive shoppers and are buying more items that are on sale.”

At Market America, 67% of mobile sales come from tablets while 33% stem from smartphones, the Internet Retailer Mobile 500 says. Mobile sales will reach $7.4 million in 2013, up a whopping 571% from $1.1 million in 2012, the guide says. The merchant’s mobile shoppers are much more inclined to buy via mobile than the typical mobile shopper—Market America’s smartphone conversion rate is 2.9% while its tablet conversion rate is a huge 6.9%, the Mobile 500 says. Market America, No. 250 in the Mobile 500, attributes its success with mobile conversion to very loyal customers and to mobile sites and apps that are streamlined and intuitive.

“We also have a demographic geared toward tablets, roughly 35-45-yearold women; tablets are more conducive to their shopping style,” says Steve Ashley, vice president of mobile and social products and Internet marketing. “The tablet shopper has more disposable income. We spend money to connect in the tablet market.”

But tablets do not dominate m-commerce sales for all retailers. Smartphones account for 89% of mobile sales at JackThreads.com, a members-only apparel e-retailer, the Mobile 500 says. The e-retailer’s sales typically last only a few days, and it regularly reminds registered members that time is ticking away—a formula likely to lead a consumer to buy on his smartphone to avoid missing a deal. In its iPad app, the merchant has started selling merchandise outside of the flash-sale format, an approach the retailer says it will add to its other apps and e-commerce site in the future. The merchant’s smartphone average ticket of $63 is not that far off from its tablet average ticket of $75. Mobile sales account for 50% of total sales, says JackThreads.com, No. 88 in the Mobile 500. Mobile sales will hit $37 million in 2013, up 357% from $8.1 million in 2012, the guide says.

90% of JackThreads.com mobile sales come through its apps, and the merchant says its tablet sales have not yet taken off because it did not cater to its app-oriented users with an iPad app until May 2013.

“The high percent on smartphone is because tablets are a new channel for us and in the next year the numbers will get much closer,” predicts Jason Ross, founder and CEO. “Our customer is a young guy who is living a crazy life on the go. And guys don’t like shopping, but they have a need to look good and care about personal appearance more than ever. The easier we can make it for them, the better. Our apps do just that. We make it easier for them to shop and buy and know how to look good.”

Purchases via tablets are likely to grow, given the trends in consumers’ hardware preferences. Worldwide PC shipments dropped 11% year over year in Q2 2013, research firm Gartner Inc. finds. This marks the fifth consecutive quarter of declining shipments, which is the longest duration of decline in the PC market’s history, Gartner says. The research firm predicts tablet shipments will grow 70% in 2013 over 2012, and says the number of tablets shipped will surpass the number of PCs (desktops and laptops) shipped in 2017. The proliferation of lower-priced tablets and their growing capability is accelerating the shift from PCs to tablets, Gartner says.

More data and analysis on global mobile commerce programs is available in The 2014 Mobile 500. The research publication is available in three formats: print, digital and as part of the all-new and completely updated Top500Guide.com. Information on how to order is available here.