9 years ago
The State of Data

Data is (even) more valuable than you think — It’s gold. It’s oil. It’s the future. Data is a lot of things to a lot of people. But, if it isn’t used wisely, it’s worthless.

You’ve heard this before: data is the new oil.

Many CEOs have taken this to heart. Their response? Drill, baby, drill.

Companies, even the one you’re in right now (probably), want to get their hands on as much data about their customers as possible. And, they’re succeeding. 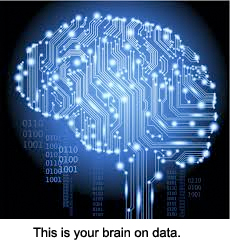 Their desire for data is understandable. It is valuable; data is worth its nonexistent weight in gold. It allows companies to find out what their customers want—and which customers want what—with greater nuance than anyone could have imagined a decade ago. More data means more return on investment, or at least that’s what it has meant so far.

The problem is, they’ve been a bit too successful.

“A change is coming.”

A change is coming.

Consumers are learning how valuable / vulnerable their data is. They aren’t going to keep letting it go for free. The oil fields are starting to ask, “What’s in it for me?”

How are they meant to do that?

Without any real connections to back it up, your little black book is just pages and numbers.

As Mark Cameron at Working Three describes, there needs to be a change in the way corporations view their customer’s data. It shouldn’t be seen as a commodity, a resource where terabytes convert neatly into dollar signs. Instead, data is the foundation and very beginning of a long, mutually beneficial relationship with a customer. Think of that data as a phone number hard-won with repartee in a noisy barroom. It’s an expression of interest, but it’s just a start.

Right now, companies are like pickup artists who have perfected collecting numbers. But what good is a contact list full of names and digits when you don’t have any real, human relationships to go with them?

The future isn’t just going to be about collecting more and more complex sets of data. It’s going to be about using the data they have in clever, new ways. It’s about building healthy, natural, long term connections.

Of course, it’s easy to lay all of this out in vague terms and grand phrases. What form are these changes actually going to take, and what can you do right now to get ahead? Well, we have some ideas, but you’re going to have to stay tuned for our next installment.