8 years ago
Understanding Twitter Analytics: What You Need to Know!

One of the key components for marketers to look at while deciding on the performance of any of their social networks is measurement. While Facebook always had Facebook Insights to give out the details of your owned presence details along with the post level activity, we always had to rely on third party estimated data for Twitter. Now with Twitter going public and aiming to generate more money via advertising, they have certainly stepped up their game with the introduction of Twitter Analytics for different components on Twitter.

The new dashboard has new functionality & metrics which makes it easier for you to decipher the performance of your account on a tweet level basis. The ‘Impressions‘ metric is the newest addition which many users demanded and Twitter has added that feature which lets you see the number of times your followers saw your tweet on Twitter.

Twitter also lets you compare your performance over the 28 day period with specific actionable metrics such as Engagement Rate, Favorites, Replies, ReTweets, Link Clicks & Impressions.Now it is much easier to compare & benchmark your content performance with the help of Twitter itself. The tweets are segregated in to different categories already if you want to view a Tweet by Tweet performance for your organic Tweets, Replies and Promoted Tweets.So if a conversation with a Twitter user is generating a lot of eyeballs and engagement for you, you will know it via this dashboard.

Some of the key metrics detailed on the Dashboard are:

The best addition to the new dashboard is the ability to download data getting a whole new information along with it for each tweet. The ‘Export Data’ option at the right hand corner gives you a lot of meta data attached with each particular tweet to play with. The information is available from 1st October 2013 till date which can be downloaded in to an excel file for further analysis.

The metrics available in the downloaded format is given below:

The same metrics are available for organic as well as promoted tweets.Such level of detail is awesome to play with for brands to accurately point out (rather than just speculate) as to which tweet resulted in more engagement and which tweet resulted in higher new followers/app installs. The user consumption can be broken down in to specific actions to analyze the behavior of your Twitter followers and plan your content accordingly. How cool is that?

Are you wondering which was our most well performing tweet in terms of clicks? Here are the top three for Digital Insights 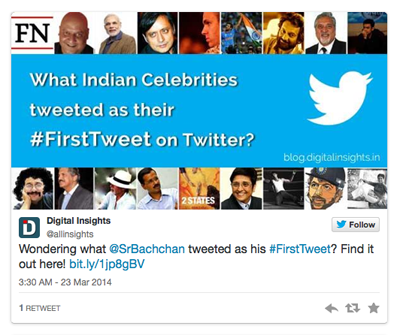 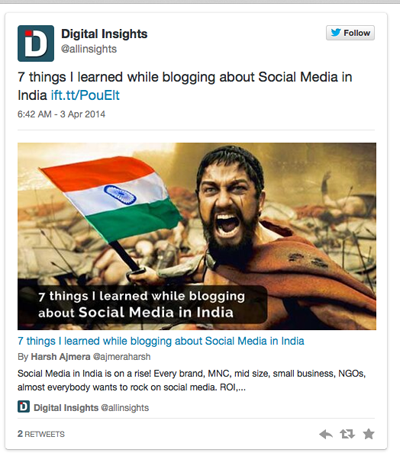 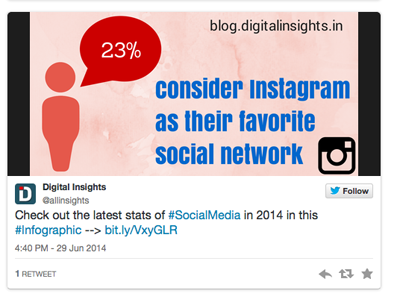 This section was introduced some time ago in the Analytics dashboard and serves as a useful reminder about the growth of your Followers over time. The ‘Followers’ tab also tells you about the top interests of your followers along with the location demographics. So if you are a blog like us, you can surely leverage this data to know the interests of your followers and blog accordingly.

Through our dashboard we know that most of our followers are interested in Marketing and SEO [Speaking of which, Did you check out the complete list of SEO factors which Google considers?] and hence we generate our content mostly based on helpful marketing content.

Twitter Cards are small snippets which appear on a Twitter timeline embedding rich context to your website content. We have integrated Twitter Cards with our blog posts and since then have seen a considerable increase in our CTR rate on Twitter. If you still have not integrated your website/blog with Twitter Cards, we surely encourage you to do so. With the measurement framework already available, you can surely test it out to see if it works for your brand and how.

Find your most influential users who are tweeting your content and build relationships with them for a long term. Focus on the value providers and ask them for their opinions to create a two way dialogue.

Twitter Analytics can be a great benefit for marketers and brands to see what’s working and generate more out of their everyday tweets.However, in the shadow of engagement hungry numbers, we should not forget that Twitter is about conversations & providing value and not about seeking more re-tweets every time.

With that thought, which feature of the improved Twitter Analytics dashboard do you value the most? Let us know in the comments or shoot a tweet to @AllInsights